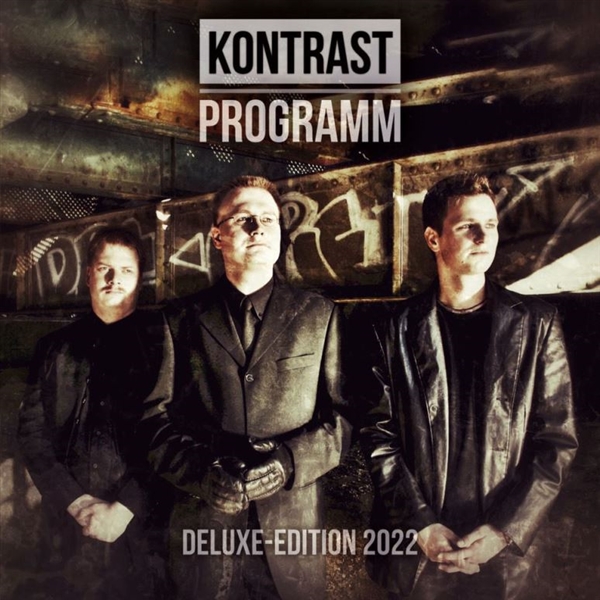 KONTRAST - this name is still the band's reputation! Already back in 1996, the four sound-fiddlers created an everblack, a true independent classic with their Einheitsschritt (3 Schritte vor und 3 zurWith Tod ... find' ich gut! (1998), 80er Jahre (2007) and their GEWC-No. 1 Durchbruch (2008), the executioners of black humour hit the dancefloors again. Their album Vision und Tradition (2008) defended its No. 1-ranking in German Electronic Web Charts for several weeks, the single John Maynard (2014) reached the top 5 on German Alternative Charts (DAC), while the longplayer Balance (2014) even peaked at No. 3 on DAC. Nachtclub completed the row of club-hits reaching No. 3 on German Electronic Web Charts in 2019. That KONTRAST cannot only be mordant but also full of feeling, finally leaked out in 1999: Freiheit? (recorded with female guest singer Ivi) is a touching farewell duet which consequently rose to be a mid-tempo hit in numerous clubs. The disarmingly deep look into failed relationships is also shown in the power ballad Fimmer vorbei (2008), accompanied by a videoclip achieving more than 500,000 clicks on YouTube. With their (n)ostalgic ballad Ostseekind reaching No. 2 on German Electronic Web Charts, KONTRAST underlined their ability to accompany melancholic lyrical content with catchy and touching melodies. After their successful fifth longplayer Unaufhaltsam (# 4 DAC, # 5 GEWC) KONTRAST now dare to take a step back into their past: Already announced a few months ago with a newly recorded version of Tod ... find' ich gut! (i. e. Death's the way I like it! in English), their first album KONTRAST: Programm will be published again with remastered audio quality and no less than 17 bonus tracks on the occasion of its 20th birthday. The Deluxe-2CDbedition will be released on 28/10/2022 on Danse Macabre Records (Distributor: AL!VE). So, the KONTRAST-classics Einheitsschritt (3 Schritte vor und 3 zurFreiheit? and Tod ... find' ich gut! will also be available on all renowned digital platforms (e.g. iTunes, amazon music, spotify) for the first time. There is no doubt: Dirk, Falko, Roberto and their charming Nebelgeist still remain even after more than 25 years what they have always been: a unique KONTRAST in the music scene

Light In Your Life

Light In Your Life