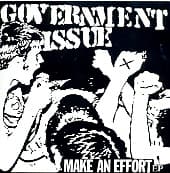 This is the first of a series the Doc will re-issue from the legendary Hardcore band; GOVERNMENT ISSUE. "Make an Effort" was originally released on Fountain Of Youth records in 1982. Re-mastered to perfection by guitarist Tom Lyle himself, this 7"ep has all the power and energy that made GOVERNMENT ISSUE the punk rock icons they are. 4 songs in all: "Teenager in a Box", "No Way Out", "Twisted Views" and "Sheer Terror".

Therapy For The Shy

Take Out The Trash