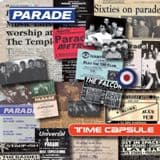 Enjoy this long overdue round-up of West Londons finest, Parade, featuring two tracks from their Detour release back in June 1998 and five unreleased tracks recorded in their brief career. Parade first came to our attention when Brit-pop was in full swing and they were blazing a trail for the new generation. I admit it didnt hit me straight away, as they were new as I was a traditionalist. But, a promoter convinced us to see them, describing them as "a bunch of peacocks all showing their plumage on stage". How could we resist? After seeing Parade live, with their energy, passion and great songs with hooks you couldnt get out of your head, we were convinced that they were the real deal. They took all the elements of MOD and brought them kicking and screaming into the 90s and beyond. So, Parade became our first Brit-Pop signing! Looking back, they might have been a nightmare to deal with but that was because they knew what they wanted and were willing to fight for it. Perhaps this is what every band needs, a bit of passion and direction. But, it wasnt their time. As Brit-Pop waned, Parade slipped away into the "the ones that got away" pile. But they were too good to stay down forever. Take a listen and judge for yourself!