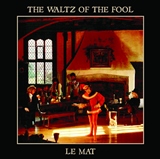 The Waltz Of The Fool

Formed Out Of The Ashes Of The Mighty Fine Southend-On-Sea Modsters "The Leepers", Le Mat Formed In 1980 And Were One Of The First To Embrace To New Neo-Psychedelic Scene That Was Exploding Through-Out The London Mod Scene. Times Were Changing As It Did Back In 1967/68. This New Scene Was Centred Around A New Shop The Regal (Where two members of the band actually worked) That Was Located In Newburgh Street One Block Away From Carnaby Street And At Night Time, The Bands And Their Paisley-Cladded Fans Emerged On Places In Soho Like The Groovey Cellar Or Gossips To Dance The Night Way To A Spiralling Kaleidoscope Of Assorted Colours. A few labels championed this new colourful scene, one in particular was Whaam! Records which was run by the infamous Dan Treacy & Ed Ball along with their own bands The Times and TV Personalities. The bands that spearheaded this new scene was Mood Six, The Barracudas & Dr. & The Medics but were followed by other equalled talented bands Miles Over Matter, The Gifted Children, The Direct Hits, The Pastels, The Page Boys & The Marble Staircase. Major label interest started and WEA Records got in on the act and released the ground breaking compilation album.. "A Splash Of Colour. Sadly as quick as this scene came, it was all over within two years.. This Le Mat album gathers up all the bands recorded output from their debut single and album thanks to Whaam! Also includes 12 live tracks from one of the bands reunion shows back in 2010 and Comes with a 12 page booklet with sleeve notes from the bands singer and a whole array of rare photos and memorabilia.