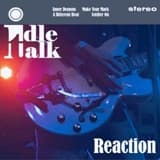 Idle Talk are a three piece band from Brighton playing dynamic, original songs. Formed in early 2015, the band have been complimented for their tight performance, accomplished songwriting and their dedication to the live energy and spirit of the mod scene which influenced them. Taking elements of indie, soul and psychedelia, their music applies a relatable modern commentary on the everyday frustrations of life. Within their first few months together, the band were invited to support iconic mod legends From the Jam (Sound Affects 35th Anniversary Tour) and Secret Affair (My World Tour 2015) which saw them playing to a sold-out home crowd at Brightons Concorde 2 across both dates. The band have already been asked to appear as part of both the March of The Mods and Music Mania festivals in Sussex early 2016. With the band having now signed to Detour records, their debut release for the label is a 4-track EP called "Reaction" which will be out on the paisley Archive offshoot. Recording for the EP was completed at Brighton Road Studios with the help of Ali Gavan and mixed by Andy Crofts (the Moons/Paul Weller band).