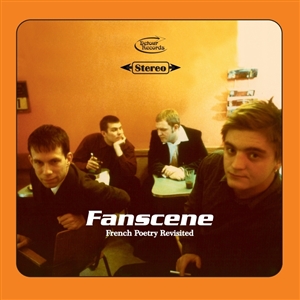 Back in 2016 Detour Records released the 7" single "French Poetry" by Swedish Power Pop heroes Fanscene. In 1997, Fanscenes debut release "French Poetry EP" was a sensation with the Swedish audiences and indie music press, but it was also their last recording. "French poetry EP" was sold out in a couple of weeks and has never been available since. Paisley Archive then proudly released a compilation that wraps up their entire career. It brings you everything the band had released back in the day, as well as a lot of previously unreleased tracks. All in all 16 Power Pop tracks with obvious influences from Mod Revival and Garage Rock (these guys literary grew up with the wave of great Swedish Garage Rock in the 1980s that spawned THE CREEPS / CRIMSON SHADOWS / THE STOMACH MOUTHS / THE VERTEX / BRAINPOOL / THE HIVES etc etc)! Such a sucess was this CD Only complaition album, PAISLEY ARCHIVE have now given in under pressure from fans all over the world to do a limited run VINYL release..... SO HERE FOR THE FIRST TIME IN A GLORIOUS FULL COLOUR DIFFERENT SLEEVE WE GIVE YOU 150 COPIES ONLY ON BLACK VINYL!!!