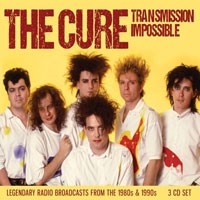 Not for sale to GAS (Germany, Austria, Switzerland) DELIGHTFUL THREE DISC BOX SET OF THE CURES BEST LIVE RECORDINGS Formed in 1978 in West Sussex, England, The Cure remain among the most elite and influential bands to emerge out of the British new wave movement of the late 1970s. Having recently reached their 40th year anniversary, The Cure continue to tour regularly. The bands last studio album 4:13 Dream was released in 2008. This new triple CD-set celebrates and documents the Cures longevity, influence and musicianship, and features the best and rarest live broadcast recordings of the groups magnificent career to date. DISC ONE houses their show from Philipshalle, in Dldorf, Germany, on 19th June 1981, shortly after the release of Faith, the bands superb fourth album. DISC TWO brings things forward a few years and contains a gig from 1984 which The Cure performed in Seattle, Washington on 21st October, 1984, while touring The Top, their 5th L.P. The set culminates on DISC THREE a decade later, with The Cures set at the 1996 Rock In Rio festival in Brazil.

After The Rain.. The Cure