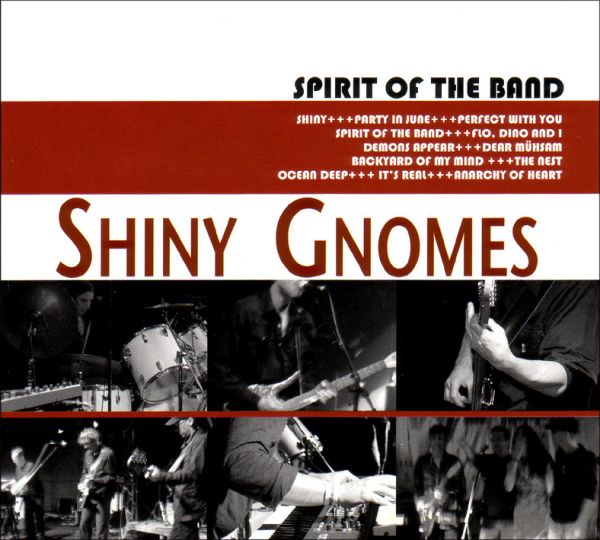 Spirit Of The Band

The Shiny Gnomes are a Nuernberg institution, having existed in various forms for almost a quarter century. Their trademarked sound is a combination of modern indies hard guitars with a healthy dose of 60s psychedelia, held together by Limos strong songwriting and melodic voice. Their early albums were released by Pastel, after which several albums were released on the major label PMV. From there they put out some of their best work on Our Choice, distributed by Rough Trade, which included their last studio album "Weltraumservice" in 1996. Twelve years later, the Shiny Gnomes return with an all-new studio album of original songs by original singer/guitarist Limo. Also back in the band is original keyboardist Gasi. They are joined by Manna on bass and Dorit on drums. Dorit herself is no newcomer to the music scene, also being the long-time drummer of the NBG area all girl band Die Shivas. Guests include Tom Liwa of the Flowerpornoes on guitar and vocals and Silvia Cuesta, also of Die Shivas, on bass. "Spirit Of The Band" shows the band as fresh and innovative as ever, featuring twelve new melodic and powerful songs, still rooted in the unique Shiny Gnomes sound their fans have been waiting for for years. Standout tracks include "Flo Dino And I", "Demons Appear" and the title track "Spirit Of The Band".

Einstein Was A Bullfighter