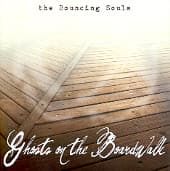 Ghosts On The Boardwalk

In 2009, The Bouncing Souls celebrated their 20th anniversary as a band by releasing a new song on the first of each month throughout the year, via digital download. They also pressed these songs onto a series of 7" vinyl records which they sold everywhere on a year-long world tour. Here finally, those 12 songs are gathered into a complete collection. Enhanced cd includes the hilarious "The Bouncing Souls 20th Anniversary TV Special" a 25-minute fake tv show! Produced by ted hutt (flogging molly, gaslight anthem, lucero) A total DIY effort: recorded in their own basement studio, released on their own label! Totally badass.

Ghosts On The Boardwalk